In my series of, “I know what I want to see, but what do you want to see?” videos I had someone ask about the installation of basics 120V or 240V circuits. Well, you got it. I’ve done electrical work for years off and on, that along with some University training should hopefully lead to some useful insight in the below video.

Of note, and a disclaimer, I am not a licensed Electrician, so please consult an Electrician, NEC code, or your local inspector before energizing any circuits. If you’re doing this in your home you’ll most likely need to pull a permit for it anyway, but many areas allow homeowners to do their own work as long as it meets code.

Got a question the other day about how to autotune an L3+ with aftermarket firmware. There are several firmwares out there that you can do this with, however I’ll stick to HiveOS as it has the most flexibility I’ve found, all the way down to the individual ASIC level. While HiveOS isn’t the only one out there, and I’m not saying it’s the best, it’s fairly simple and straight forward and easy to learn to use.

When I hear autotune I get a little worried. How does it know exactly what I want or what I need, or how can it change without a complete understanding of the setup. I treat it like a starting point, it’s a good feeler for what the board can handle, but at the end of the day I always go in and manually setup the boards as that will give me the maximum benefit with the longevity of the hash boards I’m looking for.

HiveOS states they attempt to make the hash rate the highest with the lowest power consumption, and they do pretty good. However what they state in the FAQ doesn’t seem to line up with what I’ve experienced it doing. First off, they state they start with a high voltage and work down, it appears the opposite works and in fact sometimes they needlessly raise the voltage to get rid of a few HW errors that don’t really affect performance. So they’re actually costing you money by using more power even though the HW errors were so minimal (#nonce still under 0.03%.)

That being said, it is a good starting point to understand what your unit is capable of.

A buddy called me up and let me know he was having trouble with his L3+. It was resetting every 5-15 minutes, “for no reason.” Well, there’s always a reason so I took this as an opportunity to knock the dust off (literally) my equipment and give it a go.

I’ve learned to take more photos and video as I work through these as it’s easier to speak to when I can just put a video or picture of what I’ve found. Of course I forgot to film as I inspected and found the problem (spoiler alert – DC power connector) but I caught about everything else in the video below. 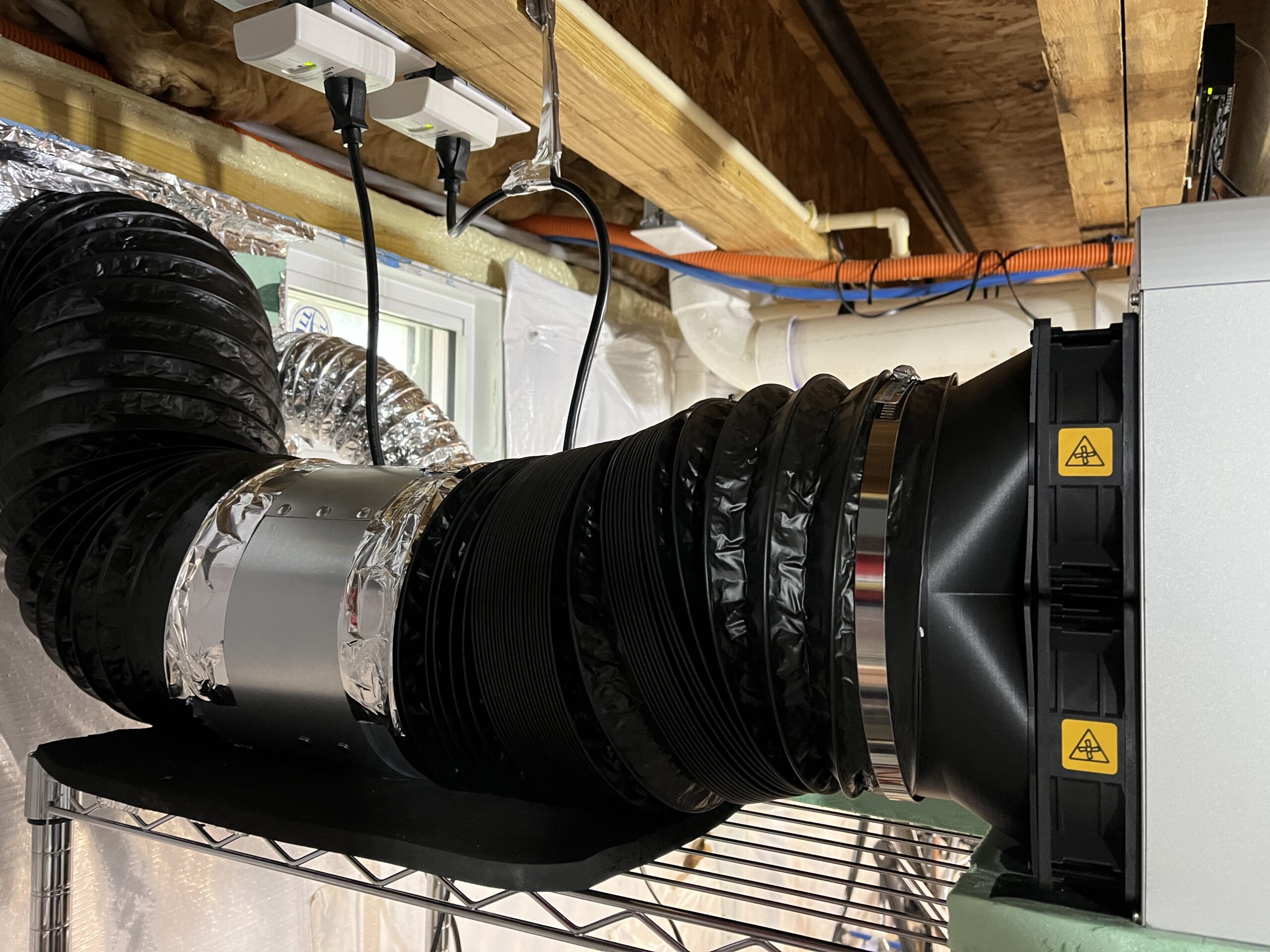 Ever have the feeling that you’re about to have an aircraft take off from your house? If so, you’re in good company (and making money) but the FAA hasn’t found you yet and last thing you need is the HOA bitching about your plane not fitting in your garage (and you left your garbage cans out.)

So I had been running a Bitmain L7 aircraft, or miner, for about a week and couldn’t get the fans under ~5300RPM, which btw creates that nice high pitched whine you can hear throughout the house. My setup was an open inlet, an 8″ dual fan shroud (https://ebay.us/13zn51) on the exhaust to an 8″ duct (amzn.to/3DgKYy4) , then ducted pretty much straight out a window. I have a 6″ duct in the window as well to keep fresh air vented in. With this setup I saw the following on the L7:

Good, not great, but good. How can we get these temps down I thought and if I get them down enough will the fans slow down?

To increase airflow in the exhaust duct I installed a 420 CFM 8″ duct fan (amzn.to/3wF6XNR) and that brought me to the following on the L7:

Regardless of the dB level, the fans were still running high enough that the fan whine just resonated through the house, there’s got to be a better way, STOP THE MADNESS! Well, if some airflow brought it down a little, a lot of airflow may bring it down a lot?

If you read my previous bloguverse post on What’s my fans CFM and how do I measure it then you know that a 420 CFM vent fan might not be enough to create negative pressure with the Bitmain L7 fans running that high. A big reason for an exhaust duct fan is to create the negative pressure to help cool and vent the unit. A tell tale sign your duct fan is working in this fashion is the miner fans themselves slowing down while temps stay the same or drop. Another way to test this is to cut a small opening in the duct between the miner exhaust and duct fan. If air is blowing out then your duct fan isn’t creating negative pressure, it’s actually adding resistance. If air is drawn into the opening, then your duct fan is functioning as designed (fancy term for OK.)

So next step, I bought an adjustable 735 CFM 8″ duct fan (https://amzn.to/3IVnXC5) and cranked it up around 80%/600 CFM (measured) and got an interesting result. Slowly the fans on the L7 started slowing down, all the way down to about 3200 RPM, which is where they’re sitting now after a few days. They bounce between 3200-3400 RPM, but most important the fan whine is gone and the duct fan isn’t any louder than the lower RPM Bitmain fans. Another quick point, the first duct fan I used was all metal, and the second was a polymer. I did several temp measurements at the exhaust, just before the duct fan (32C/90F @ 1 foot), and found that they were low enough to use a polymer fan (rated at 140F) without the fear of it melting or having any deformation.

So a significant drop in dB, but most importantly once the fans got under ~4000 RPM the fan whine was all gone. If you know much about the dB scale, or even if you don’t, it’s logarithmic. What that means is that if something, like having a conversation with your cat Fluffy (if you’re into that), is measured at 60 dB, then turning on a vacuum will scare the cat. Why? Maybe old Fluffs hates vacuums, but maybe it’s the fact that a vacuum would be considered a factor of 10 times louder, scaring your feline friend. Now what about carrying your little Fluffer-nutter outside near a busy intersection? Well you’ll get the crap scratched out of you, probably because traffic is roughly 20 dB louder than your friendly conversation with Fluff-daddy, which equates to a noise 100 times greater than the secrets only you and your cat share.

So when I go from 81 dB to start, down to 73 dB, I’ve cut my basement hobby down from Grand Central Station to a white noise coming from below, maybe even fooling my wife into thinking I’m vacuuming! Trust me, mama will never get mad at you if she thinks you’re cleaning.

In summary, and what’s most important other than making $$$, happy wife happy life!

No cats were harmed in the making of this bloguverse post. 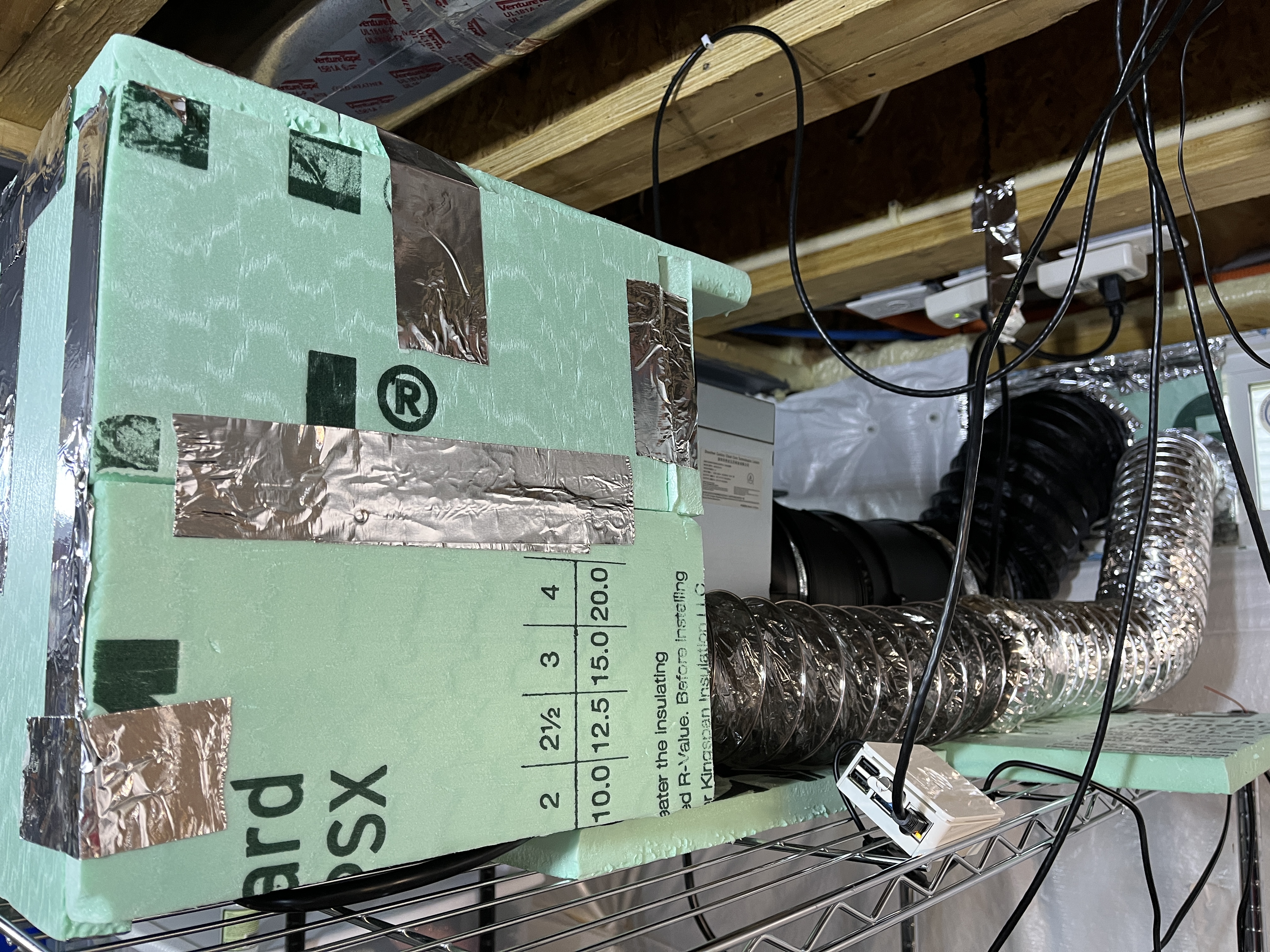 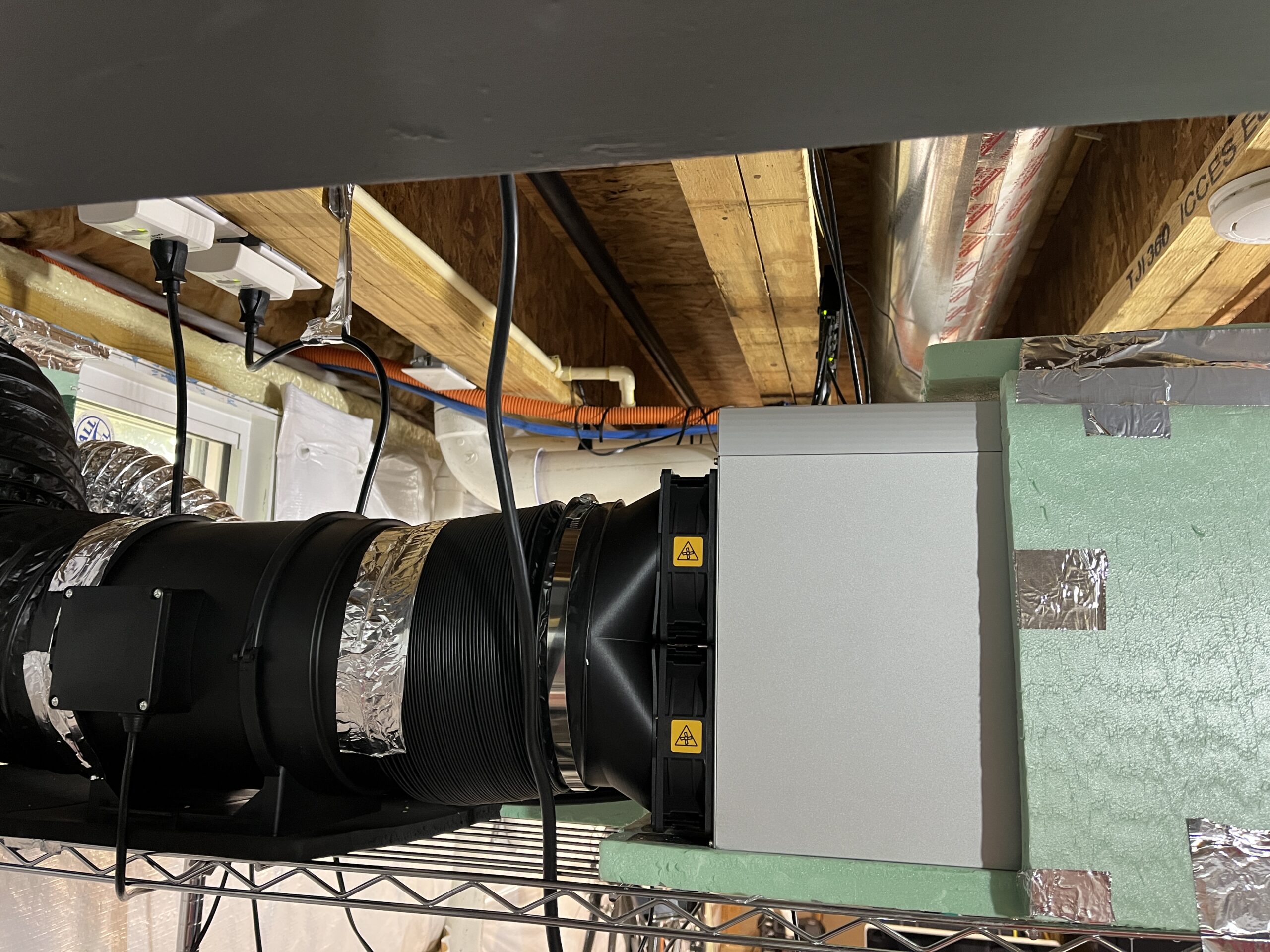 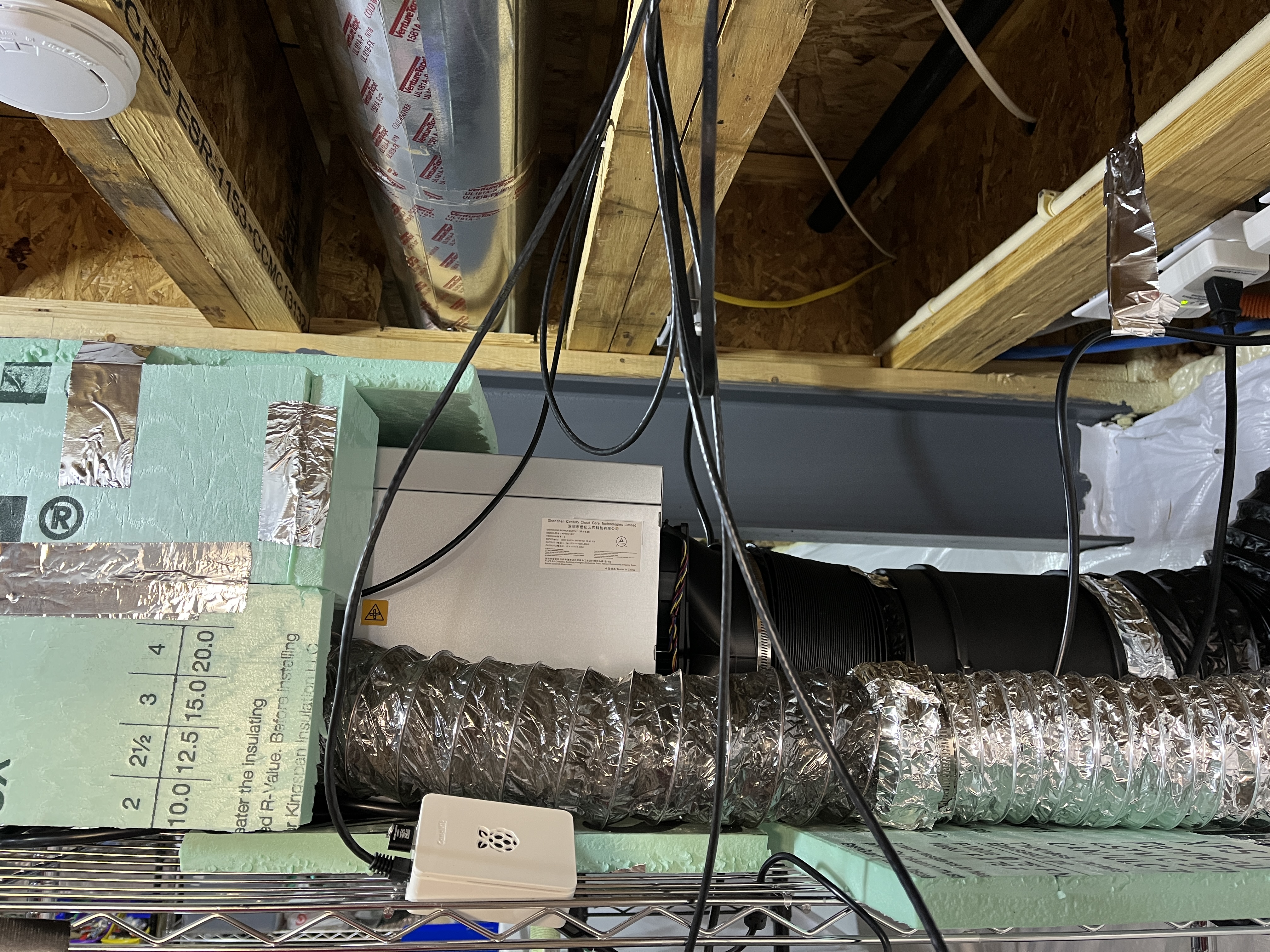 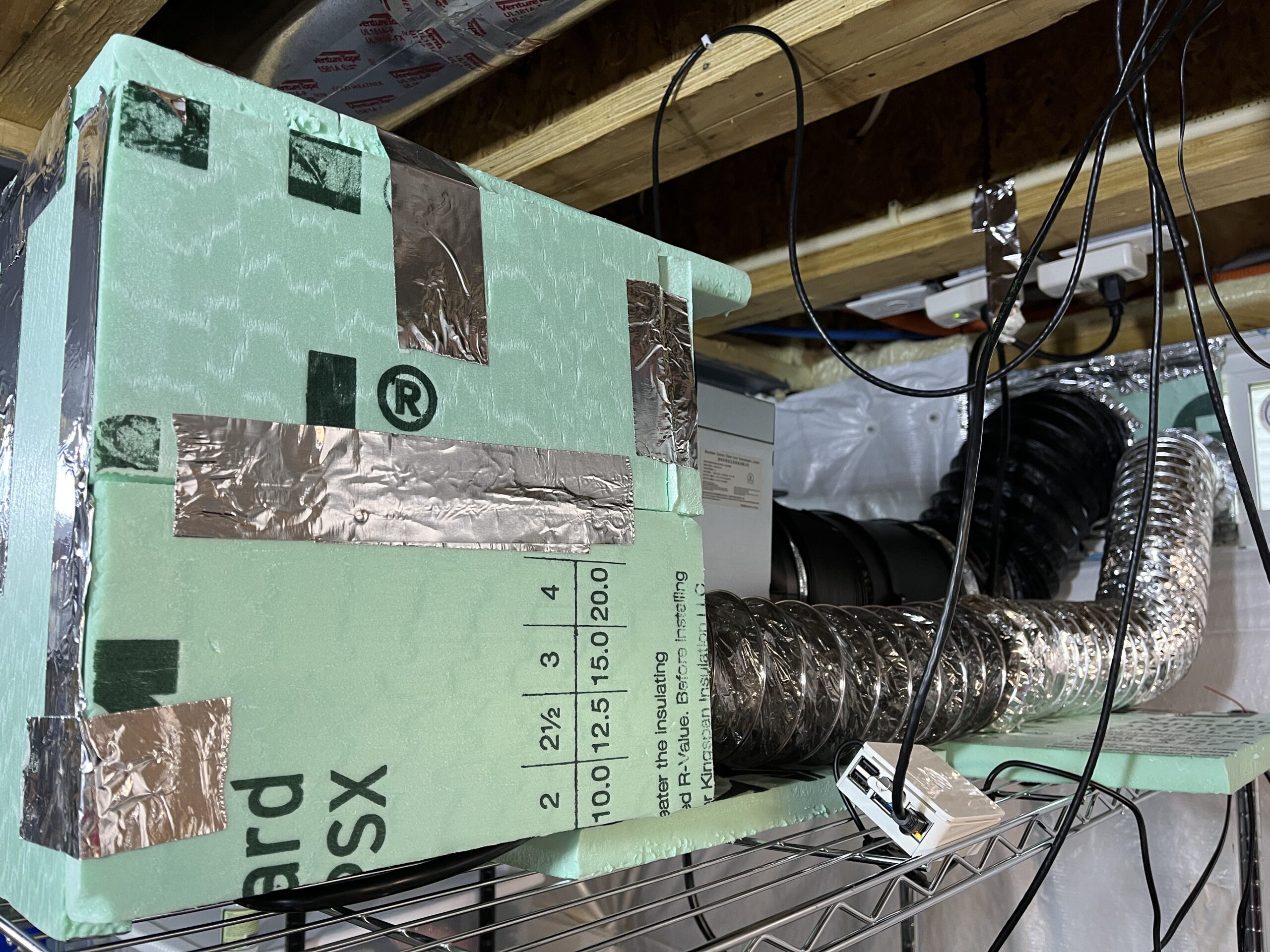