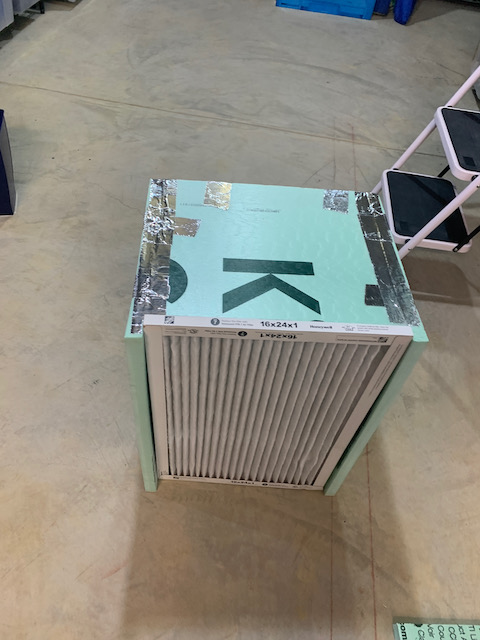 If you’ve heard it once, you’ve heard it a million times, you’ve got to keep the air cool and clean running into these L3+ units. In scouring the Internet I’ve seen anything from a class 1000 clean room to running big dryer sheets on the intake. I don’t really have the real estate or funding to put an ISO 9000 clean room in, conversely I’m not willing to risk the safety of my family and home to a dryer sheet being sucked in over the intake. The later of the two solutions being the cheapest of course, however the most risky since any restriction on the air intake can rocket the ASIC temperatures and cause an electrical fire that can have devastating effects beyond just the miner itself.

I’m all for minimizing the maintenance and increasing the longevity of my L3+ units, however this is really more of a hobby and not a full time job so finding the proper balance can be tough. I’ve talked to several people that religiously take their miners down on a monthly PM schedule, take the hash boards out, blow compressed air through them to root out any dust or contaminants (which having been in the circuit board manufacturing world in the past I can honestly say is a terrible idea, more on that later), and do the same for each power supply unit. What does that gain them, for starters they will collect less dust than someone that does that semi-annually or more, but how much dust really collects on the hash boards depends on your location.

I’ll be honest and upfront, I have run most my units for close to a year and other than an initial cleaning, I haven’t touched most of them since. That being said I’m not advocating that for everyone, in fact I was concerned with dust from where they are running as it’s an older warehouse, but they continue to crank along. I pulled one recently for a power supply cable issue (that’s another bloguverse entry) and went to inspect the hash boards and found very little dust, and no other contaminants to speak of. The only thing I can imagine is that the CFM of air moving across the hash boards, coupled with the fact that I cleaned them when I first got them, created a smoother surface where dust doesn’t settle. I have another unit I bought used from someone that obviously did oil immersion, that unit I could never quite get the hash boards completely clean and it picks up a tremendous amount of dust, so much that I do filter air for that one unit.

I learned early on, mainly through research but also through some practical testing on one unit, never restrict the intake airflow. How does one filter the air then, two thoughts come to mind, forced air or simply a larger intake that funnels down to the 120mm fan. I didn’t feel the need to invest in a forced air fan so I went with a system that uses a standard sized furnace filter and ducted that through two 4″ inputs that merge into one 4″ duct right at the 120mm fan. I used a 4″ duct shroud for the 120mm fan from Coolerguys.com and tied directly to my filter ducting.

After watching the L3+ status screen off and on for a few hours I saw no noticeable change in chip temps or fan speed. Is it a winner, sure, but when I put that side by side to all the other L3+ units I have I would say, depending on your situation, don’t get wrapped up in the idea you have to filter your incoming air. Definitely check your temps and fan speed daily, but absent any abnormalities, keep it cranking.