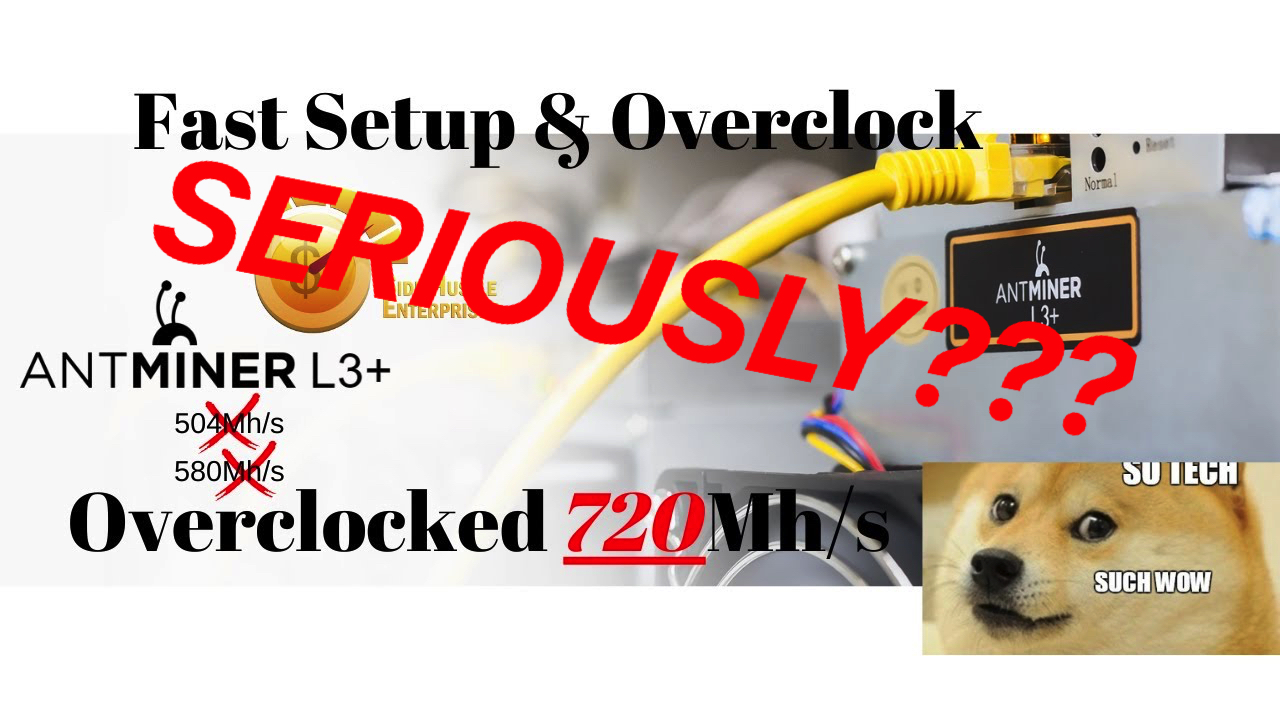 Like many of you I’ve often wondered just how much can I get out of my L3+/++, at just the level before I completely smoke it. For my own education I did some digging to find out just how much damage can be done at various overclocked frequencies.

Let’s just stick with the base L3+ set to the standard factory firmware and base settings. That puts us at an operating frequency of 384MHz and 10.11VDC per hash board IC (I’m using V1.5 hash boards.) That gives us our baseline of 504 MH/s (126 MH/s per hash board.)

Bitmain specs out the baseline L3+ at 800W nominal operating power, so if we take out ~60W for fans and control board, that leaves us with 740W total (185W per hash board.) Although after some research I believe they don’t account for the fans or control board on their specifications so let’s just set that number back to 200W per hash board.

Quick head math gives us roughly 1.59 W/MH, which is pretty much dead on from Bitmain’s specification of 1.6 W/MH. I ran one of my L3+ units at this level over the course of a few hours and saw that Temp(Chip) of each hash board remained at a very reasonable level, as shown in the chart below, but what’s interesting to see if the varying level of W/MH and Temp(Chip) levels throughout the experiment.

A few notes regarding the testing, I ran each speed/voltage for between 10-15 minutes as it takes about that long for the temperature and MH/s rate to stabilize. Additionally the ambient room temperature was 72 degrees and the fans ran at variable speeds, mostly between 5000-5400 RPM. Also a quick learning point for me, using ohms law we can see that each hash board requires approximately 17-20A of 12VDC.

As you can see from the graphs, the actual (MH/s(AVG) is actual normalized rate which basically means this is the closest number to the actual work you’re doing. MH/s(RT) is an instantaneous value that doesn’t take Nonce% into account and can give you a false sense of the actual work you are doing. What does that mean, well as you’ll see in the next series of graphs, the AVG rate and RT rates track until we start getting massive amounts of HW errors which directly impact our Nonce%. For those that don’t know what the Nonce% is, it’s the ratio of HW errors to Nonce (numbers used only once.) The goal is to minimize the Nonce%, as well as the DiffA%. Generally if you’re not overclocking and un-volting too bad you’ll see a low number of HW errors which will keep your Nonce% under 0.03% (I’ve heard this arbitrary number many times and I still can’t explain it.) There is some direct correlation of the Nonce to the DiffA (difficultly of last accepted share), so keeping the Nonce under 0.03% keeps your DiffA near 0.0002% or less.

Long story short, if you hear about some amazing overclock settings where someone is getting 650-700 MH/s from an L3+, that’s most likely their RT and not the AVG, or actual work. I ran up to a 500MHz setting and got nearly 650 MH/s(RT), but as you can see in the data (and data doesn’t lie), the actual AVG rate was closer to 575 MH/s.

OK, great, thanks for all the data. So what does that mean for me, what are the best settings? I, nor anyone on the Internet, cannot answer that for you for the straight up reason that every board and situation is different. There are general guidelines to follow which I hoped to echo through this data. There is a point of diminishing returns, and that happens way before reaching temperatures that may damage your boards (generally under 75-80C.) A few graphs below show the varying temperatures and the slight rise with respect to operating frequency.

There are many different versions of firmware that can autotune, I actually use HiveOS on most of mine, and they do a pretty good job of fine tuning however you have to pick the basic frequency to run at before they can tune your L3+ in. If you are in a similar environment that I described then the data points to a sweet spot around 450MHz at 9.92V. That’s my basic starting point.

I hope this helps, and as always, hit me up with any questions or comments.

One thought on “Overclocking on the L3+, is the juice worth the squeeze?”